A house of cards 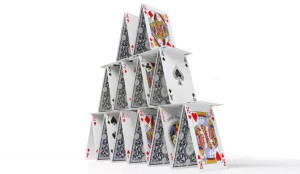 An image of a house of cards came to mind when I was at our Trussell Trust briefing. Nothing exists in isolation - and one factor, such as unexpected bill, sets the whole structure wobbling.

The Trussell Trust's senior research manager Tom Weekes showed members soon-to-be-released data on how people are using food banks.It showed increasing numbers and less donations to supply them. Those in social housing, often on the lowest incomes, are the most likely users.

But it was when Tom used the data to paint more of a picture of people's lives that the house of cards emerged.

People using foodbanks are much more likely to have someone disabled in the household. Anecdotally, they are increasingly likely to be in employment, using supplemented Universal Credit to supplement low wages.

They will have multiple debts. And be much more likely to be lonely and isolated, knowing or feeling they have no family and friends to turn to. A significant number don't even have don't have proper internet access, reducing social contact even further.

It became clear how easily just 'one more thing' could bring the house down.

The second half of the briefing was members asking questions, considering what the new data could mean for their work and sharing what they are doing locally.

Some themes emerged from what I heard:

- The focus on helping those who would not normally ask for help
- The care invested in training frontline staff to look for warning sighs of someone struggling - could damp be an indicator someone is frightened to use their heating - and to reach out in a sensitive way
- The attention paid to linking struggling people up with proper help, internally or through partners
- The practical support members are determined to give
- The importance of their role as community anchors, for instance making office space available to local authorities to offer warm hubs
- The value of local partnership that help the wider community as well as their own tenants. We heard the example of work with organisations like Bread and Butter Thing.

The briefing, chaired by Carol Carter, Chief Executive of Origin Housing, concluded with a reminder of the insight held by place-based social landlords to reach out and join the dots when someone may be struggling.

A house of cards that's wobbling doesn't have to topple - but sometimes you need someone to care enough to help steady it.

Read more about what the costs of living crisis looks like locally and work members are doing in their communities.