You are here: Home > News & Stories > Our News > Tackle cost of living crisis 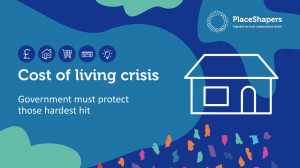 PlaceShapers has signed a letter calling on next Prime Minister to reassure low-income families they will receive sufficient support through a “national emergency”.

70 charities and community organisations signed a letter calling on the two remaining Conservative Party leadership candidates to show “compassion and leadership” to working age low-income families by making up the £1,600 shortfall they will face this winter.

PlaceShapers chair Matthew Walker said: "Members exist to provide homes to people who would struggle to afford homes for sale or rent at market rates our residents are often those with lower or variable incomes and, often, poorer health outcomes. Our residents are disproportionately amongst those who will be unable to manage the even greater calls on their income this winter."

The Government has already pledged £1,200 to each of the most vulnerable households but the rising cost of living, on top of runaway energy bills, means the support package is no longer sufficient.

Energy bills for low-income households are £1,800 higher than last year, and other costs such as food have risen by £1,000 at the same time. This means the current £1,200 payment to everyone on means-tested benefits only covers about half of the rise, showing the need for another payment of at least the same magnitude.

Unless government support doubles at least, low-income families, already unable to pay their bills, will have to cover the shortfall themselves, falling further into arrears.

Nearly three quarters of low-income households receiving Universal Credit or other means-tested benefits have been forced to go without at least one essential this year.

The letter states, “this situation cannot be allowed continue” and the prospective Conservative Party leader must ensure the social security system always provides enough to be able to afford the essentials.

It also calls on Liz Truss and Rishi Sunak to commit to making debt deduction rates from benefits more affordable. MPs said these deductions pushed households into destitution and to depend on food banks.

“You were both senior members of a government that pledged to ensure that the most vulnerable and least well off get the support they need. It is only right that this be your top priority should you take office,” it ends.

“History shows that, when Britain faces a national emergency, Government is at its best when it steps up and takes determined and creative action to protect people and businesses, often in previously ‘unthinkable’ ways. We saw that after the 2008 crash with the nationalisation of banks. We saw it in the pandemic with a generous furlough scheme. The nation faces another national emergency now, and people rightly expect the Government to act to offer protection. Instead, we are seeing a Government asleep at the wheel, and leadership contenders failing to grasp the scale and urgency of the crisis.

“Even before the current crisis the social security system failed to cover the essentials, degraded by years of cuts. People are already selling their possessions, taking on risky debt and building up arrears they may never be able to pay back. And things are about to get far worse. Planning for a substantial support package needs to start immediately. Without it, vulnerable people will face a catastrophe on a vast scale when winter sets in. The consequences of sitting idly by are unthinkable”.

Dan Paskins, Director of UK Impact at Save the Children, said:

“When energy bills rocket in the Autumn, families who already have it tough are going to find things even harder. Parents will face impossible choices over whether to prioritise feeding their children or heating their homes.

“We have signed this letter because the UK government must do more – and fast.

“At the very least, the government should double the emergency support package announced in May to ensure families are shielded from a catastrophic winter. The most efficient way to provide this support would be through further payments through the social security system."

The full text of the letter is below

We believe the impact of the cost-of living crisis on low-income households is the gravest issue our country faces.

So far this year, nearly three quarters of low-income households[1] receiving Universal Credit or other means-tested benefits, many of them working families, have been forced to go without at least one essential. This means people having to skip meals or not being able to heat their homes properly.

Many of our organisations work directly with these families and are becoming overwhelmed, too often unable to provide the support so desperately needed.

This situation cannot be allowed to continue. As the prospective leaders of this country, we urge you to act now to demonstrate the compassion and leadership needed to tackle this issue head on.

We ask you both to pledge that, under your premiership, everyone who needs it will be properly supported when they hit hard times. This means ensuring that, at a minimum, the social security system always provides people with enough to be able to afford the essentials.

Low-income households need urgent reassurance now that they will receive sufficient support to weather the cost-of-living storm as it intensifies further this winter. This means committing to:

Ensuring that low-income households are provided with sufficient support to cope with the average £2,800 rise in the cost of living they face to April 2023. Given the £1,200 in core support committed so far to households on means tested benefits, this means this support should be at least doubled. It should also vary by need, with higher payments for households with higher needs, for instance families with children.

The most efficient way to provide this support would be through further payments through the social security system. Making debt deduction rates from benefits more affordable. Those subject to debt deductions face particularly high levels of hardship. This simple, low-cost action would enable people to keep more of their money and immediately relieve some of the financial pain they are enduring.

You were both senior members of a government that pledged to ensure that the most vulnerable and least well off get the support they need. It is only right that this be your top priority should you take office.

Save the Children UK

The Association of Charitable Organisations

[1] Source: Joseph Rowntree Foundation (June 2022) Not heating, eating or meeting bills: managing a cost of living crisis on a low income. This surveyed ‘low-income’ households in the bottom 40% of incomes, including the approximately 5.6 million of these that claim means-tested benefits.

⬇️Whichever party owns the discussion - and action - on homes will stand to win a lot of voters at the general election #ukhousing #CPC2022 https://t.co/htENsNVAfp

Join us on Thu 6 Oct, to get a clearer picture from @TrussellTrust of the increase in foodbank usage in the UK. In this session we will explore what more we can do to build a future free from hunger. Register here https://t.co/xC023u0mMT

📢Members! The week ahead... 👋🏽.@James_P_Bryson at #CPC2022 👋🏽Bristol @brighterplaces_ event for residents 'In Conversation with @RSHEngland' postponed due to rail strike. But we have another on 11.10.2022 👋🏽State of Hunger briefing with @TrussellTrust https://t.co/pU52fHMF4L

Eyes and ears on the fine city of Birmingham..start the week with one of the many ways local housing associations like @BVTNews are helping communities thrive. https://t.co/9F7jmrEse4

What is THE topic of conversation at #CPC2022 this morning? No, not that one. How can we properly invest in left behind places, featuring our member @KarbonHomes with @createstreets @LiamHalligan @rosegrayston starting in 10 mins https://t.co/mTCKmgygQv

We are absolutely committed to the @natfednews evictions pledge. Members will do everything they can to support people through the #CostOfLivingCrisis https://t.co/34JyxWi4eJ