You are here: Home > News & Stories > Our News > After the White Paper: levers for levelling up

After the White Paper: levers for levelling up 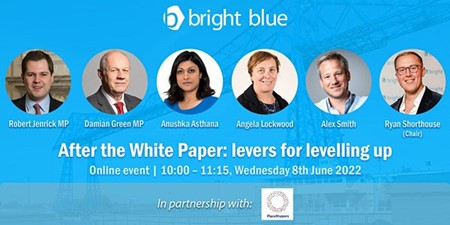 We are delighted to be hosting a public discussion, in partnership with Bright Blue, entitled: After the White Paper: levers for levelling up.  The event will be held virtually on Wednesday 8th June, 10am - 11.15am.

PlaceShapers have an important role in the regeneration of communities and should be seen as key partners in this levelling up agenda. We set out our argument for this earlier in the year in our report Stay Local, Go Far.

Following the publication of the Levelling Up White Paper, and the announcements in the Queen’s Speech this week, the Government is determined to show it still intends to deliver for ‘left behind’ areas. But what are the levers in by which this will happen? How important is it that decision making is made at the local level and what role can housing associations play in the development and delivery of levelling up?

You can register to join the discussion here.

What role do place-based organisations have in Levelling Up? Pleased to be partnering with @WeAreBrightBlue to discuss levers for levelling up. Don't forget to register 👇 https://t.co/WUPek6jOLH

📢Find out from @HACThousing about funding to support your community groups to host events which promote black history and culture throughout the year, not just during #BlackHistoryMonth https://t.co/pFHSuaWJff

Congratulations! A bold and brilliant project by @NHC. This work has set the bar for how we should approach resident involvement, especially on such challenging and important topics like net-zero! 👏👏👏 https://t.co/v5fR8zE8bx

Find out what member @HightownHA have been doing in their area to tackle the housing crisis in this short video👇👇👇 #WeBuild https://t.co/UEac5UvLfK

When the @bankofengland Governor is talking in terms of apocalyptic inflation threat, that's people at checkouts today not able to buy enough food to feed themselves and their families. https://t.co/rHpa5n1gHA