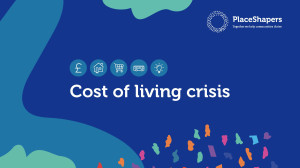 Progress Housing Group’s Community Support Officers are part of the frontline team dealing with tenants’ needs, and are seeing at first-hand, the significant impact the rising cost of living is having.

Samuel Griffiths has been supporting one of the Group’s tenants, Kim, a single mother living in a three-bedroomed home in Lancashire. Kim has been struggling financially as a result of the shortfall in housing benefit caused by the bedroom tax. This has wider implications as she was unable to meet the costs of her electricity pre-paid meter and is constantly worrying about being able to feed her two young children, aged three and seven.

In trying to avoid the bedroom tax, Kim wanted to downsize to a smaller property so that she could sustain her tenancy. This was proving to be a long and difficult process, due to other financial pressures.

Samuel explains: “I asked Kim how she was managing financially. She broke down and explained she only had 23p in her bank account and had to wait until the following Monday before she was paid. To make matters worse, she mentioned she only had £1 of gas and £1 of electric on her pre-payment meter and both were in emergency credit.”

Samuel took pictures of the gas and electric meters and contacted Kim’s energy provider to see if they could assist, but due to her debt and having already used the emergency credit, they were not willing to help her.

He then contacted social services and explained the family’s situation and that he had concerns that the children would be left without heating or food, but there was nothing that could be done.

He adds: “I then received a call from Kim. She was very emotional on the phone as she informed me that her electric had gone and she wouldn’t be able to make dinner for her children.”

Samuel contacted South Ribble Borough Council, and Kim was referred to a local community hub, who topped up her gas and electric by £20 and delivered a food parcel, which kept her going until she was paid. Samuel also referred Kim to the local food bank and referred her to Progress Housing Group’s Financial Inclusion Team.

Whilst Kim was given this intermediate support, she once again found herself struggling financially, as Samuel explains: “Unfortunately due to the cost of living crisis, which is exacerbated by the increased cost of energy, Kim has been in the same position in March, April and now also in May. She has already received three fuel vouchers (the current maximum amount allowed) and will not be eligible for any more.

With the energy price cap rising by almost £700 in April and set to rise again by another £800 in October, Kim has gone from ‘just managing’ to being destitute and in ‘absolute poverty,’ and without any meaningful state intervention, our tenants are going to continue facing serious financial hardship due to this cost of living crisis.”

The board are looking forward to meeting with members in real life at our early evening drinks reception at the @natfedevents National Housing Summit, Mon 12 Sep. Members and friends of @placeshapers are warmly invited to attend https://t.co/TmmSeWi56k

Saturday 30 July was the #InternationalDayofFriendship To celebrate, @WHAorguk tenant Angela Highton talks about her experience of making new friends through our WHAs over 50s centre LifeTime. https://t.co/ds2X6yWcKM

Members support colleagues helping residents through #CostOfLivingCrisis. "Imagine how gruelling that is when you’re dealing with any hardship in your own household;" @SohaHousing blog from our event with @greatwellhomes @wythenshawe_chg and @MSVHousing https://t.co/Z23WPniV70

Warning lights flashing ahead of pandemic - millions now in very deep poverty or destitution. Heaviest concentration among those least able to cope. Grim but essential reading from @jrf_uk for all like us tackling #CostOfLivingCrisis. https://t.co/xSepCQRA9K

Average age of death for a homeless man - 45, barely higher than Victorian times. Thank you to all involved in @oxhomelessmvt. At our #RefugeesAreWelcome event, we learned 3 people have been granted Indefinite Leave to Remain because of this partnership. https://t.co/QPQJBmDsyk https://t.co/MYDOdh3cE3